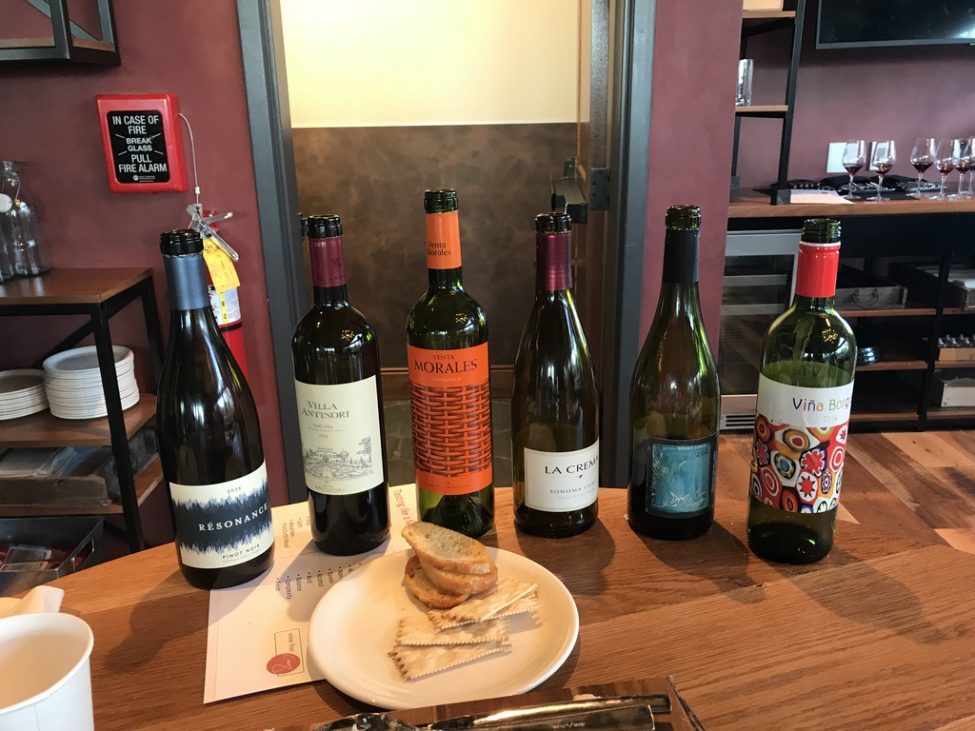 DVC Takes their Beverage Series up a Notch

Last year DVC introduced their “Beverage Tasting Series” at Bay Lake Tower’s Top of the World Lounge. These sessions, moderately priced at just $40, brought DVC members together for tasting and education in wine, beer, and spirits. In May of this year, they expanded this series of classes to Reunion Station at Wilderness Lodge introducing “Speak Easy Craft Cocktails”. Now, DVC takes the sophistication up to an 11 by introducing these events to the newly opened Wine Bar George at Disney Springs. 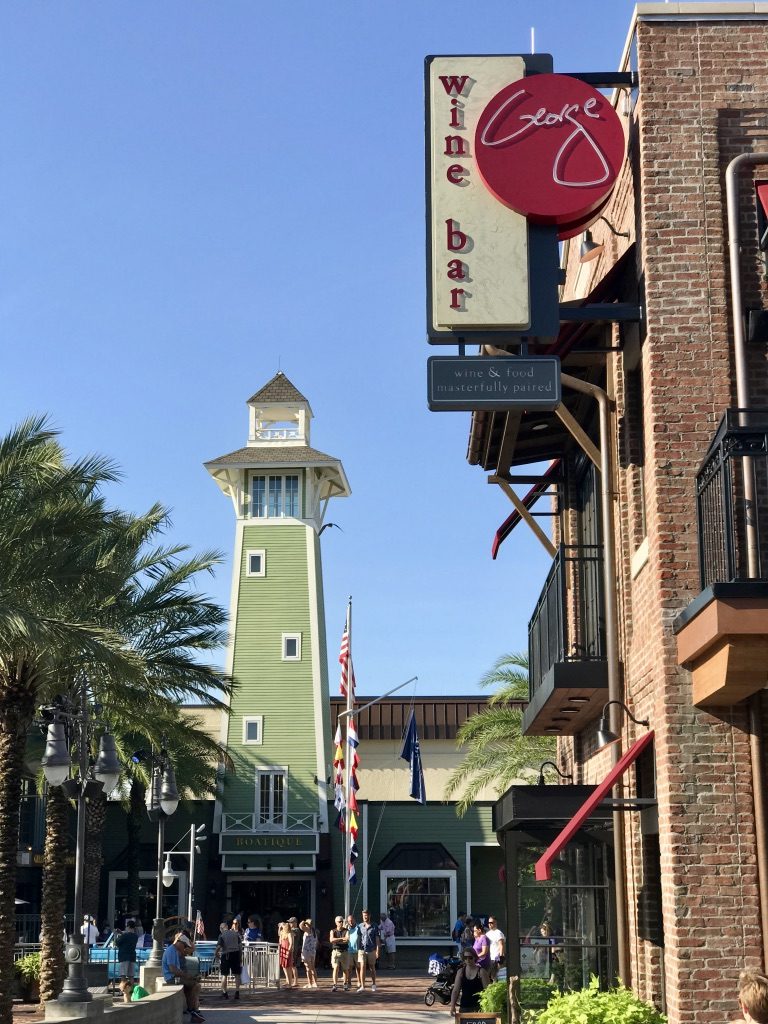 I had the fortune of attending the 3rd “Weekly Wine and Cheese Tasting” event on June 19th billed as “Pinot Noir from around the world” and I brought my good friend, Josh Brooks, a card carrying Sommelier himself, along for the ride. First, at $45 per person, these sessions are slightly more expensive than the Beverage Tasting Series; but, you can tell immediately where the extra few dollars have gone.

Held on the second floor of the Wine Bar George venue, the view of Disney Springs from the floor to ceiling windows is stunning. Several tables made from converted wine barrels are placed throughout the stunning cherry hardwood floor. The center piece of each table was WBG’s charcuterie board which was well-appointed with scrumptious meats, cheeses, and accoutrements. Oh, and of course, the wine. Six WBG labeled glasses, each filled with 1 to 2oz pour of a fabulous looking wine. Josh uses more technical terms to describe the wine but I’ll stick with fabulous; I refer to myself as a “Wine Muggle” in his presence. 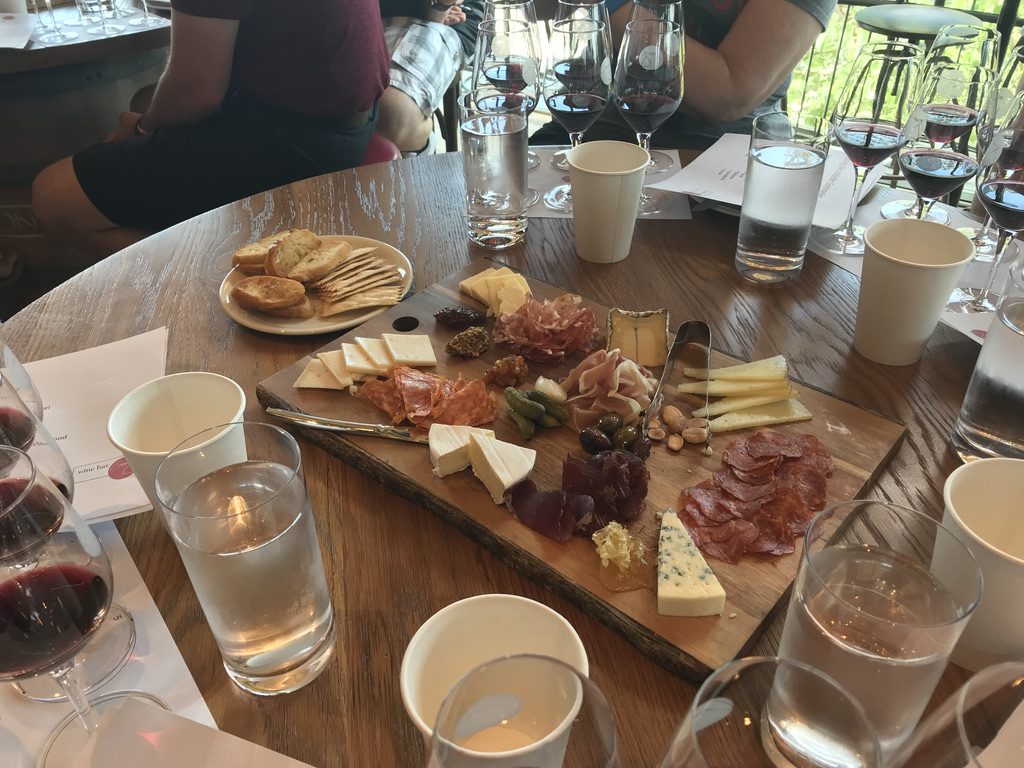 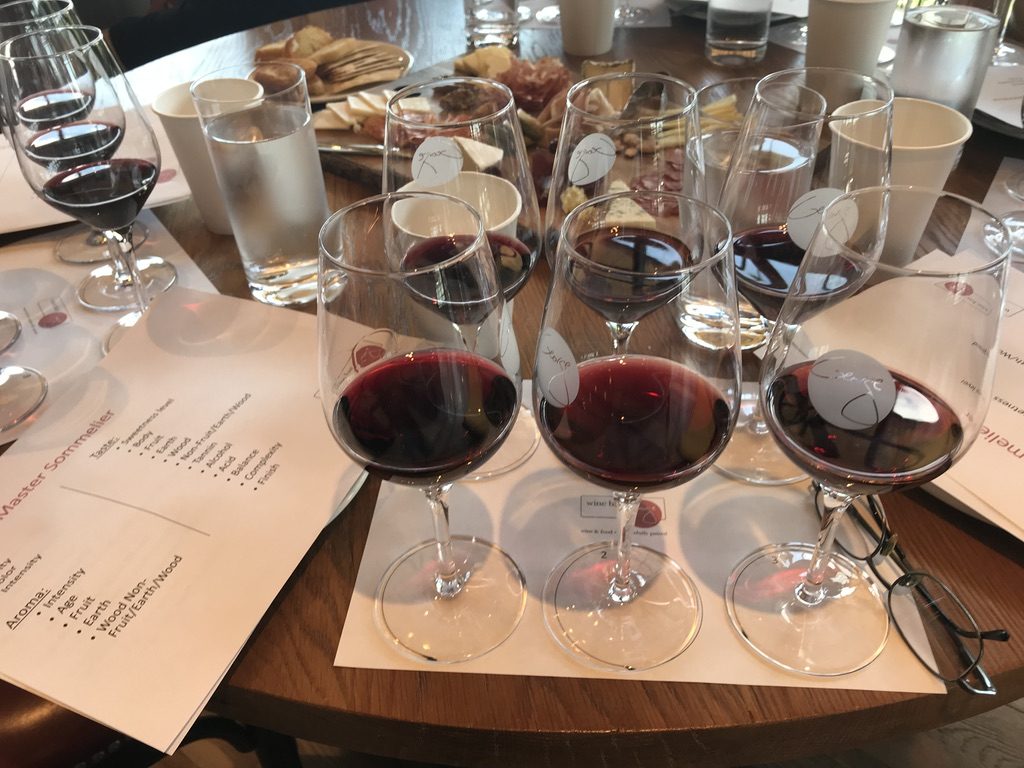 What struck me as we sat down is that there was no card to tell you each wine; just a piece of paper with circles labeled 1 through 6 and a conspicuously titled paper “Tasting like a Master Sommelier.” Not but a moment after we sit down, in walks none other than George Miliotes himself! He announces that there’s been a change to the agenda for today’s lesson. He’s decided that while it would be great to taste a lot of great pinot, wouldn’t be better if we learned how to actually TASTE pinot? Better yet, to actually learn to tell what is a pinot and what isn’t? Yes that’s right, George Miliotes, one of only 249 Master Sommeliers in the entire world, is teaching us a class on tasting. Josh is literally dying inside. Poor guy. He had to hold it together. We soldiered on in the face of adversity, and the delicious wine. 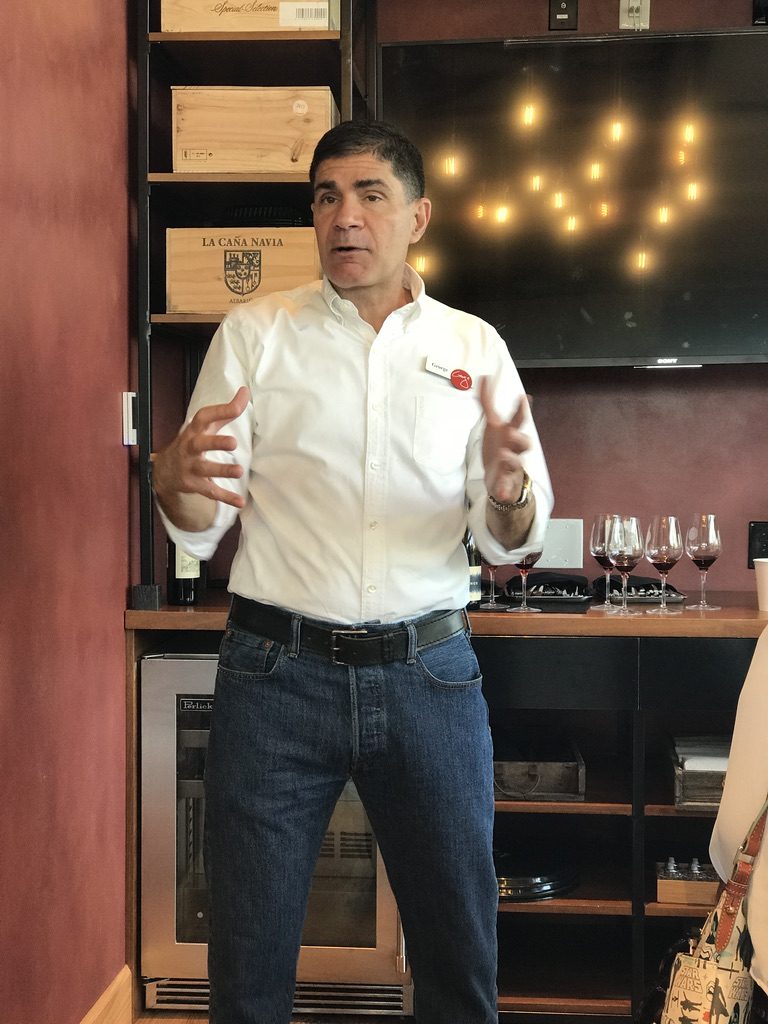 As George began presenting we could tell immediately why he is the perfect fit for Disney. He’s a consummate story teller. Over the course of 90 minutes he both informs and delights us with a witty, self-depreciating style and humorous anecdotes. We all know we’re supposed to smell the wine before we taste; but until this class I had no idea that holding the glass a certain way was even a thing! I also learned that fantastic wine doesn’t have to be expensive. Bottles of the wine provided ranged from almost $90 to a mere $11! George taught us what to look for, and most importantly what to taste for, when finding that perfect balance of quality to price. 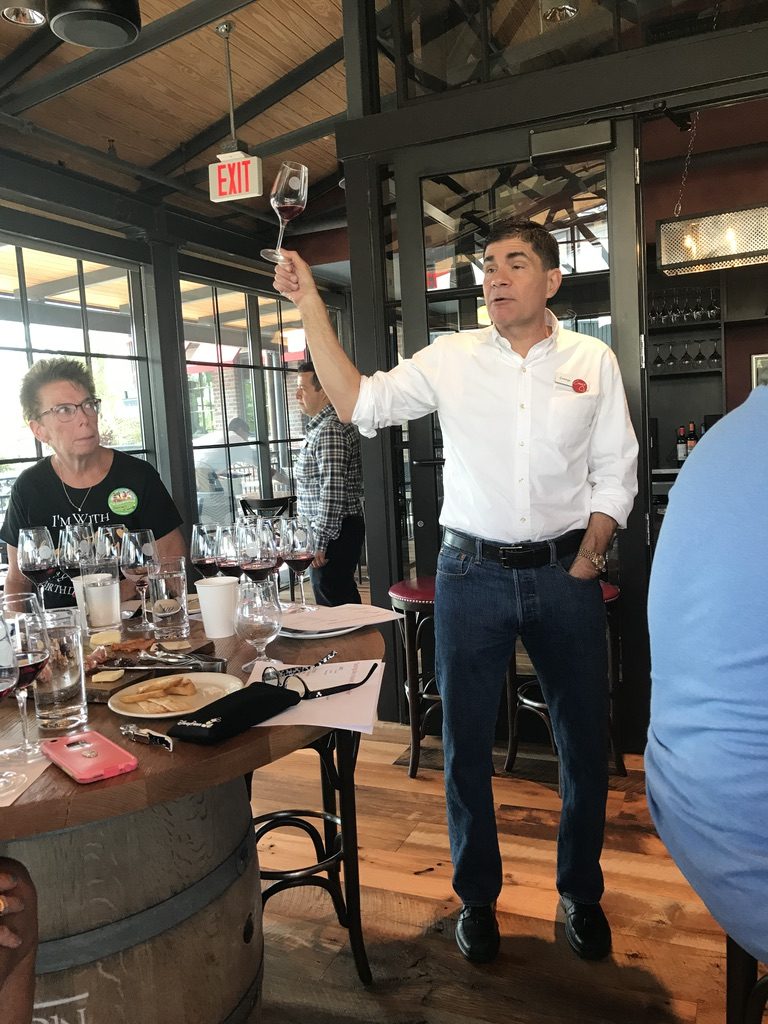 I’ll leave the superlatives to Josh who will take you on a journey through the wines offered . . .
I was very excited when George mentioned that he wasn’t doing all pinot noir and, in fact, he was going to blind taste us on 6 wines. I relish every chance to blind taste wines, especially those picked by an MS.

What stood out the most is the purposefulness behind the decisions preparing for this class. The charcuterie and cheese board featured deliciousness ranging from easily approachable to interesting but not so off-center as to be off-putting. The wines he selected were perfect. They offered a range of quality and price, but each wine was exactly representative of their style.

Typically, when blind tasting, we discuss the grape and region we believe it is, but also mention ‘laterals’, or others wines that are contenders as well. With this tasting, the wines are so ubiquitous and typical that I just wrote down one wine, not the standard three that I force myself to consider. I deduced five out of six wines correctly, just firing from the hip in an informal setting; but I credit that completely to George picking the perfect wines for the occasion.

The garnacha was fruity, slightly boozy and featured dark, brandied cherries and candied berries. Garnacha typically reminds me of fruit roll-up. Lots of cooked fruits. The Beaujolais was fresh, fruity, young and really only tasted like one thing; strawberry jam. It was delicious. The Sonoma County pinot noir was classic Sonoma. I was in Sonoma County from the nose; cherry cola all day. The tempranillo was classic; dried cherries wrapped in a tobacco leaf. The Chianti was also typical: lots of tomato leaf, herbs and a little cedar. The tartness and grip of Chianti almost always takes me by surprise; it’s always more forward than the color would lead me to think. The final pinot was also great; quite a bit of new oak, which softens and smooths the wine out. New oak also costs a bunch of money, which is why this was the most expensive wine of the evening!

This class was the third time I’ve blind tasted with George Miliotes in a group setting, and by far the most casual. I had a ton of fun, some great practice and fantastic time at George’s place. 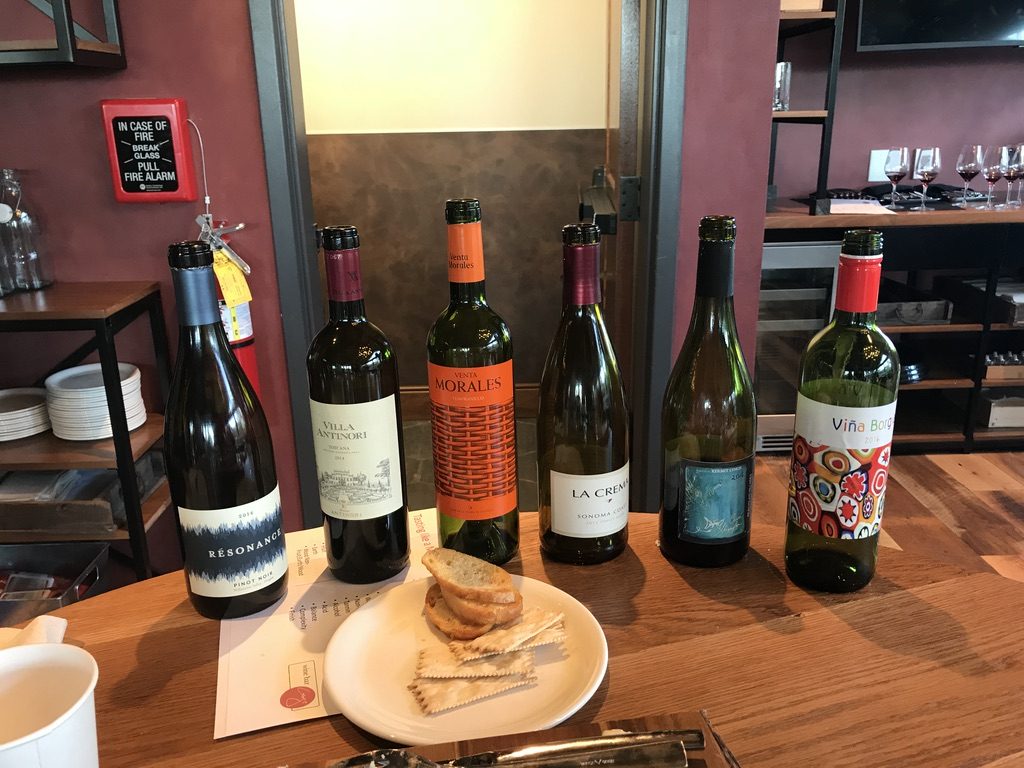 More than just a Tasting

So there you have it, another over-the-top experience brought to you by the folks at Disney Vacation Club. This event was far more than just a Wine and Cheese tasting, it was definitely a learning experience. George’s passion and enthusiasm for his craft simply radiated and his story telling reflects the expertise that only someone who is a ‘Master’ of their craft can achieve.

It’s important to note that the DVC event schedule makes no mention of who will lead these sessions; so it’s possible you may get someone other than Geroge on future events. I sincerely hope that whomever is tapped to lead the session will bring this same level of excitement and authenticity as George does. He even comes by for selfies. 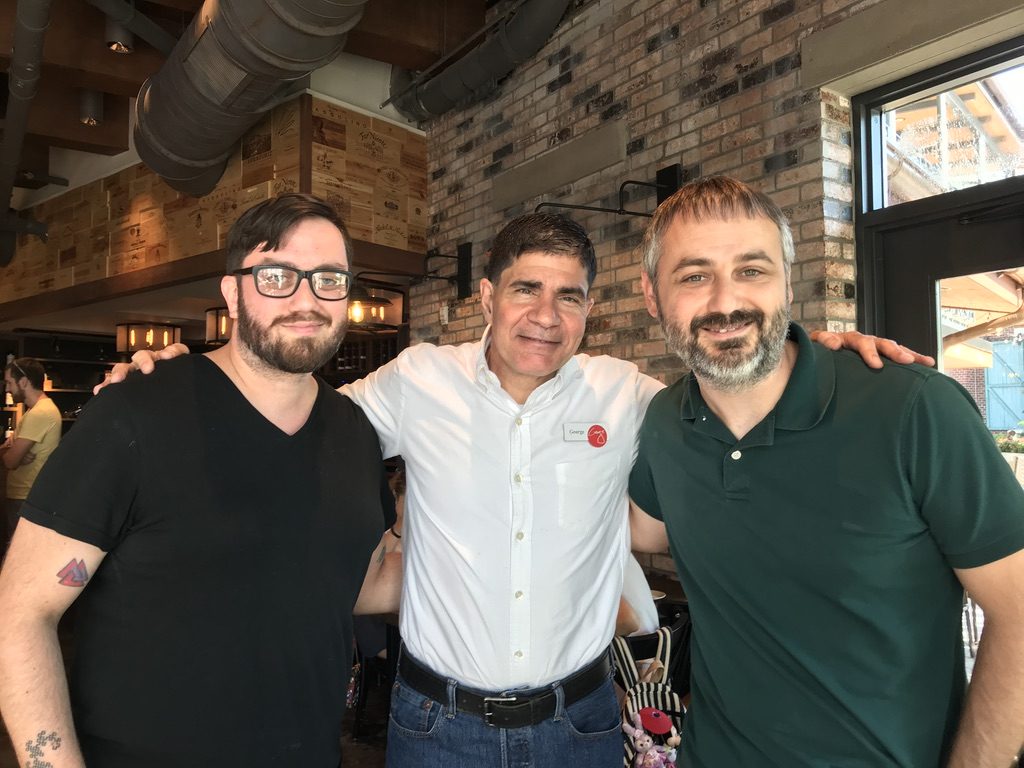 Weekly Wine and Cheese Tastings run every Tuesday from June 5th through August 28th. The event runs approximately 90 minutes in the 2nd floor tasting room of Wine Bar George at Disney Springs for $45 per person which includes tax and gratuity. A “Monthly Dinner” which is billed to include a “reception with George Millotes” along with a 3-course dinner and wine paring is also available on July 11th, August 15th, and September 19th, for a cost of $115 per person including tax and gratuity. Contact DVC Member Services to book this truly unique event. 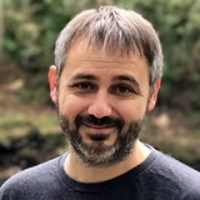 Blaine is a native Floridian, Orlando resident, and DVC owner who never quite grew up; but, thankfully manages to keep stable employment enough to support his Disney habit. You’ll find him enjoying the Parks with his two young boys and beautiful wife who graciously gives him an ample Disney allowance. View More Posts By Blaine