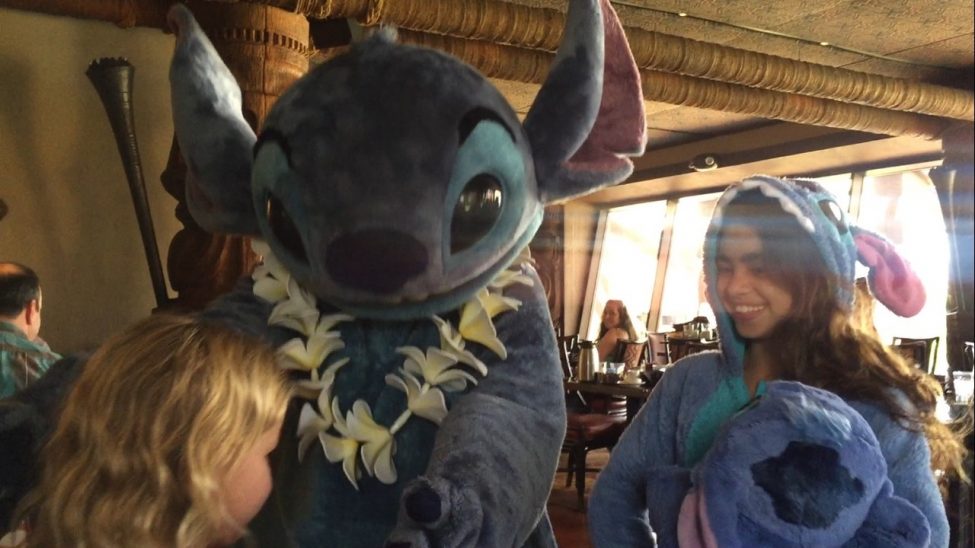 All of us have our favorite Disney characters. Some, like Mickey, seem to be everywhere. Others are trickier to find. My daughters’ favorite is Stitch, who has limited meet-and-greets and dining appearances. Luckily, we tracked him down! 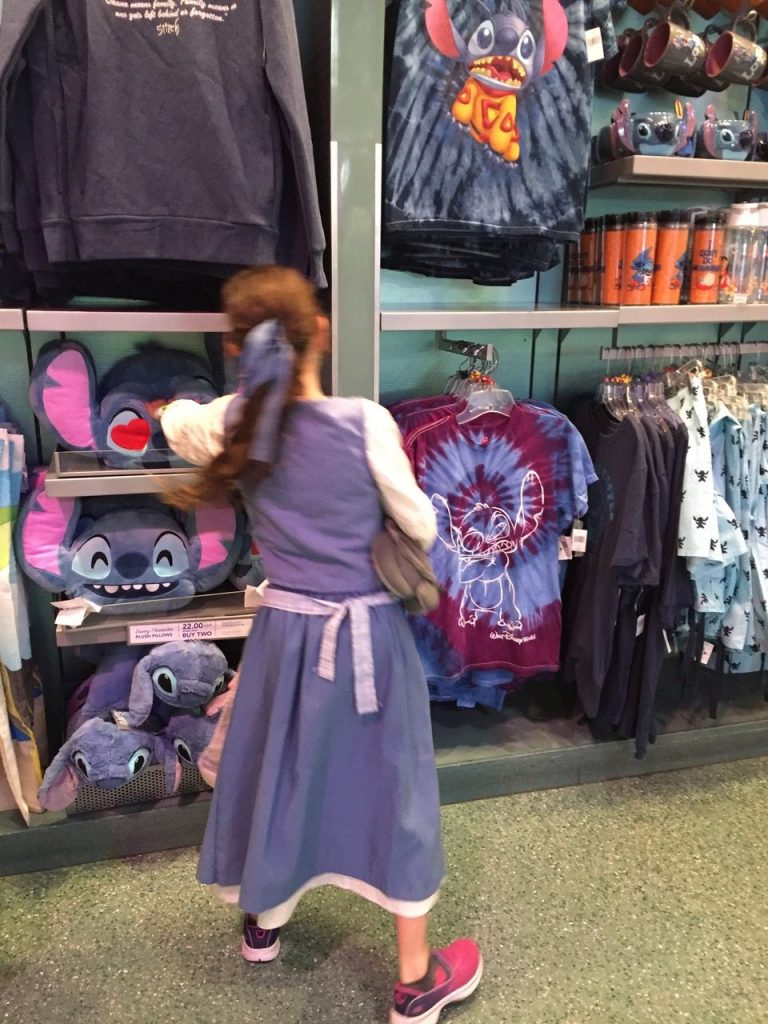 If you want to meet Stitch, you first have to get in gear. Stitch merchandise is available at all of the parks and can be found using the map feature on the Disney Shop Parks app.

If you’re in the Magic Kingdom, check out Mickey’s Star Traders in Tomorrowland, which seems to have more Stitch-centric gear than the Main Street Emporium.

Guests in Epcot should visit Mouse Gear, but those in Hollywood Studios and Animal Kingdom might have a harder time finding Experiment 626 (for those of you not “in the know,” that’s Stitch’s original name).

The best place we found Stitch supplies is actually outside of the parks at the newly updated Moana Mercantile in Disney’s Polynesian Village Resort, which is just a quick monorail ride away from both the Magic Kingdom and Epcot. This shop has the most concentrated selection of Stitch items, including several shirts that were not on the Disney Shop Parks app, and it provides convenient delivery to your home resort. 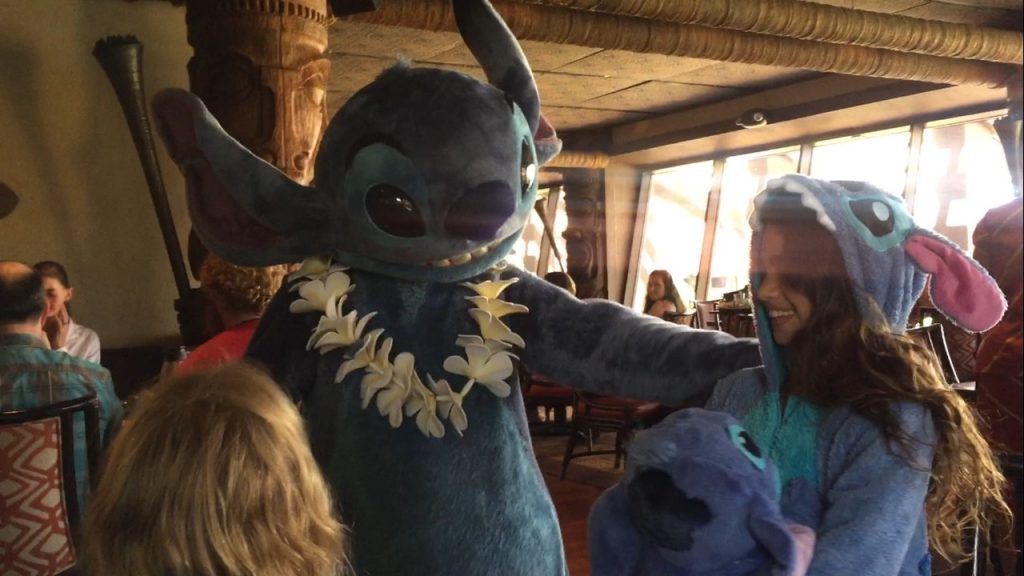 Finding Stitch himself might be more difficult than finding a new Stitch plush or T-shirt. He doesn’t like the Florida heat, so you might serendipitously run into him at Epcot or elsewhere, but the only reliable place to find him in the WDW parks is at Stitch’s Alien Encounter Character Greeting in the Magic Kingdom. This Tomorrowland location was formerly Stitch’s Great Escape and, prior to that, the EstraTERRORestrial Alien Encounter.

These attractions have been removed and replaced with a meet-and-greet similar to the Character Spot in Epcot but with an emphasis on Stitch. This location does not offer Fastpass+ reservations, but it is air conditioned, so at least you can be cool when you get Stitch’s autograph!

For those who simply want to see Stitch and not share a hug, you can look for him on a float during the Move It! Shake It! Dance & Play It! parade in the Magic Kingdom. When the parade stops at the hub in front of Cinderella Castle, Stitch even gets down to boogie with his youngest fans. Have your cameras ready for this because all the action happens in mere minutes. 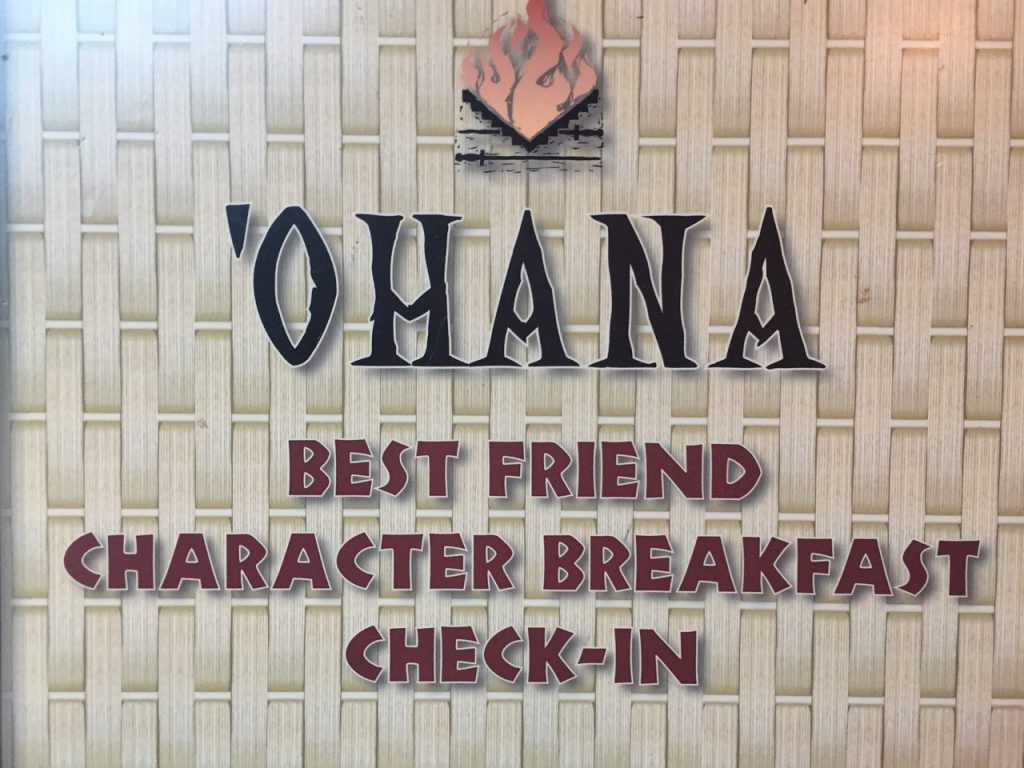 If you want more personalized interaction with your favorite alien, then consider going to the Ohana Breakfast at the Polynesian Resort. This table-service character dining experience allows guests to pose for photos with Pluto prior to their meals and then meet Mickey, Lilo, and Stitch while they eat a variety of island-inspired breakfast foods. There is even a parade around the restaurant for little ones to enjoy with their new friends. 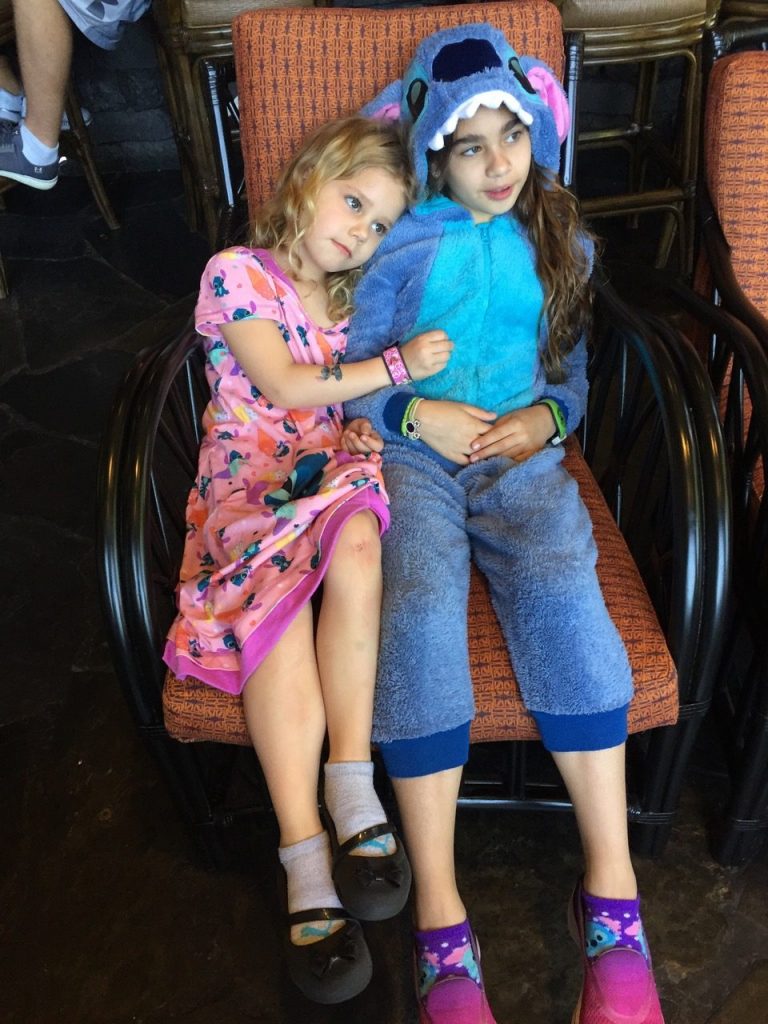 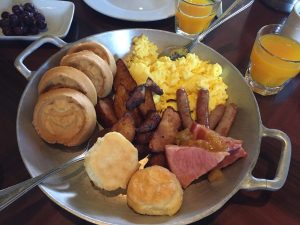 My family was excited to enjoy the Ohana Breakfast during our most recent trip to Walt Disney World, but it was honestly somewhat of a disappointment. We had to wait nearly an hour after our reservation time, and the food, which was a plentiful assortment of Mickey waffles, potatoes, meats, and fresh fruits conveniently brought to our table, was about the same quality as the quick-service breakfast at our home resort.

The characters were rushed, most likely because of the long delay to seat guests, but my two girls enjoyed finally meeting Lilo, who does not make appearances in the parks. They also loved parading around the restaurant behind Stitch and somehow talked him into signing nearly everything they owned, including a Hawaiian print backpack and their stuffed animals. Apart from the long wait and mediocre-quality food, it was an excellent experience for those hoping for more interaction with Stitch and his friends. 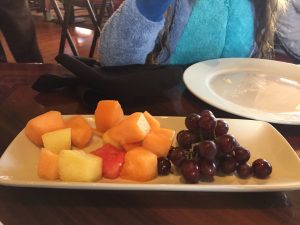 I should add that before we left the Ohana Breakfast, I actually asked the manager if such a long wait was normal, and she explained that there had been some problems that morning and offered us a Fastpass+ to make up for the delay, but I also talked to other diners who said they had similar waits in the past. If you do decide to share a meal with Stitch, I would recommend doing so on an “off day” in which you do not have plans inside the parks. This is probably a great breakfast option for DVC members staying in the Polynesian Villas as well, but it is a good idea to eat a snack before you go, too, just in case.

For those of you who need a Stitch fix between Walt Disney World vacations, check out your local Hot Topic or www.hottopic.com, where you can get Stitch clothing and accessories like purses and ear headbands. Much to my daughters’ dismay, Hot Topic also sells adult-sized Stitch clothing including shirts and dresses, but they do not carry children’s sizes.

When you love someone as much as many people love Stitch, it’s worth going out of your way to share a moment together. As always, Walt Disney World offers many ways to get up close and personal with your favorite characters (and alien).