How old were you when you first visited the Magic Kingdom?  What was your favorite ride?  Which rides did you avoid?  Of course the Magic Kingdom has something for everyone, but some rides fit better than others. Here’s a look at the best rides, by age group…

Best First Ride for All Ages 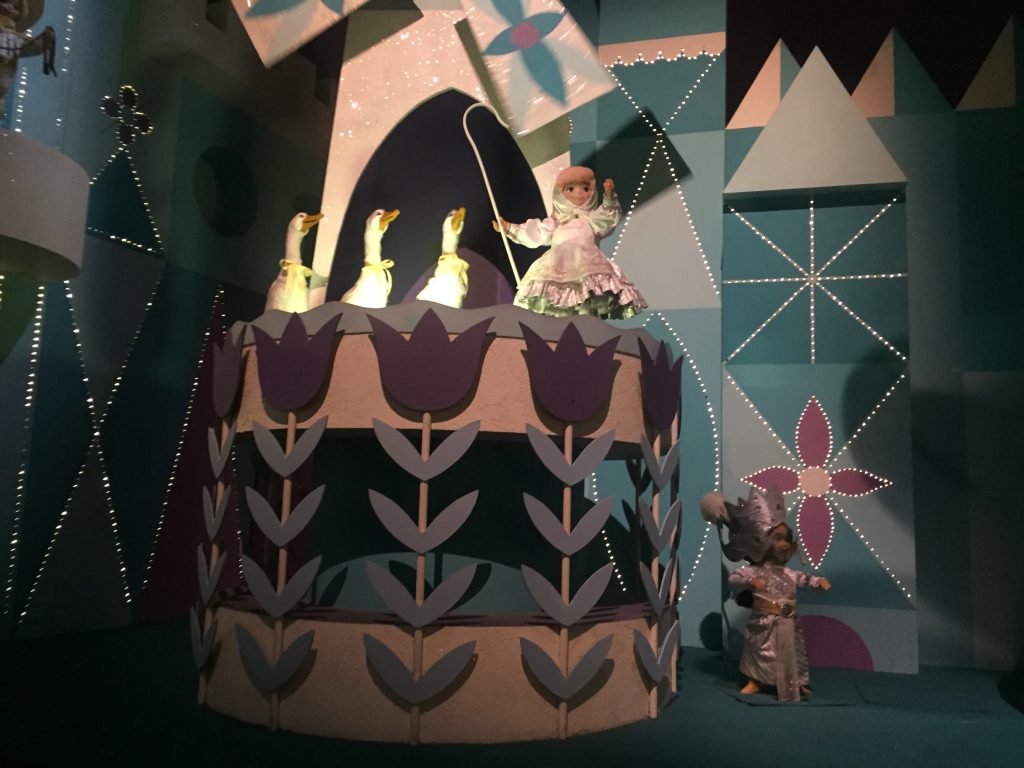 Perhaps the most iconic ride in the Magic Kingdom is “It’s A Small World.”  Passengers take a leisurely boat ride through the countries of the world while serenaded by the classic, mind-sticking song.  The ride is calm, joyful, and great for all ages.  It may not be the most time-efficient ride first thing in the morning (there will be longer waits for other rides later in the day, so you may be tempted to rush elsewhere first), but it will be easier to get the memorable song out of your head if you ride early.

Best Rides for Babies (2 and under)

Walt Disney’s Enchanted Tiki Room in Adventureland is technically an attraction and not a ride, but it is nonetheless a hit with the little ones due to its singing flowers, talking birds, and lively music.  There is a “scary part” with thunder that may upset some toddlers, so be prepared to give them a hug until the birds resume their melody.

Walt Disney’s Carousel of Progress in Tomorrowland is another attraction enjoyed by the younger crowd.  It involves clapping, singing, and a dog.  It also provides a good opportunity for parents to rest in air-conditioned comfort.

Walt Disney World Railroad (with stops in Main Street, Frontierland, and new Fantasyland) gives an interesting whirl around the Magic Kingdom.  It also offers a relaxing, continuous motion that might help lull the little one into a powernap. 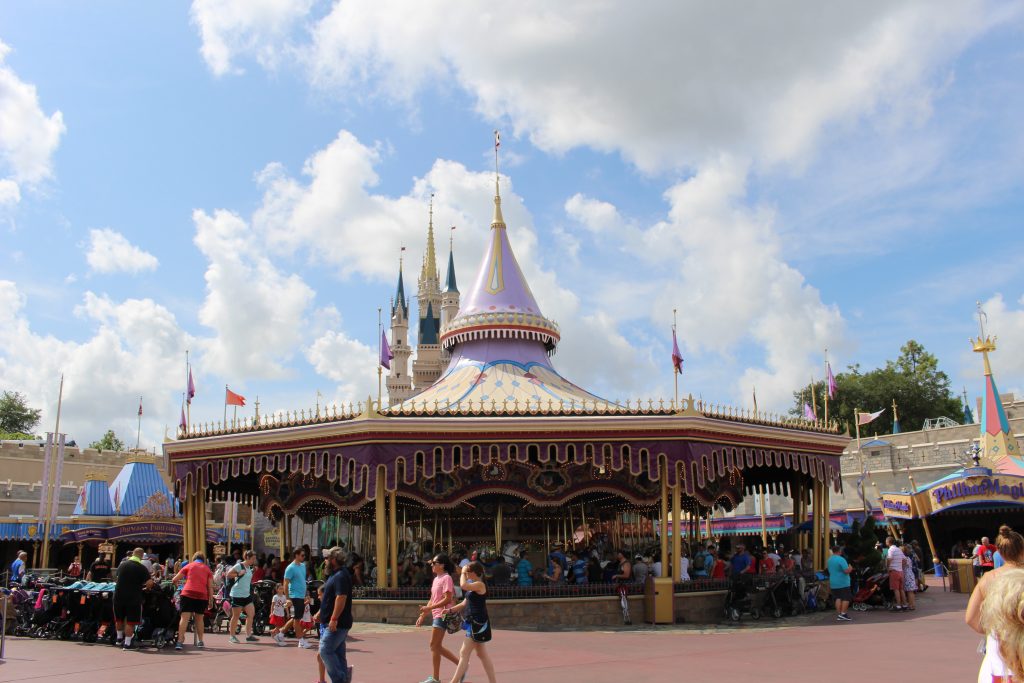 The Prince Charming Regal Carrousel in Fantasyland has horses, mirrors, sparkles, and is in the center of the magic.  Babies love it.

The Haunted Mansion in Liberty Square is perhaps the most counterintuitive ride for this age group.  Yes, it could terrify slightly older kids, but babies love the flashing lights, floating objects, and catchy song.  The darkness in the stretching room may come as a surprise to little ones, so hold them if possible.  My daughter rode it for the first time when she was nine months old and stared in wide-eyed joy the entire time.

The Dumbo the Flying Elephant ride in new Fantasyland combines one of the most popular rides with one of the best childhood pastimes: a playground.  Hidden within the queue is an indoor playground that is so fantastic, my daughters have waited in line just to play.  This ride also allows kids to control the altitude of their elephants, which could potentially be more fun for the child than for his/her adult companion. 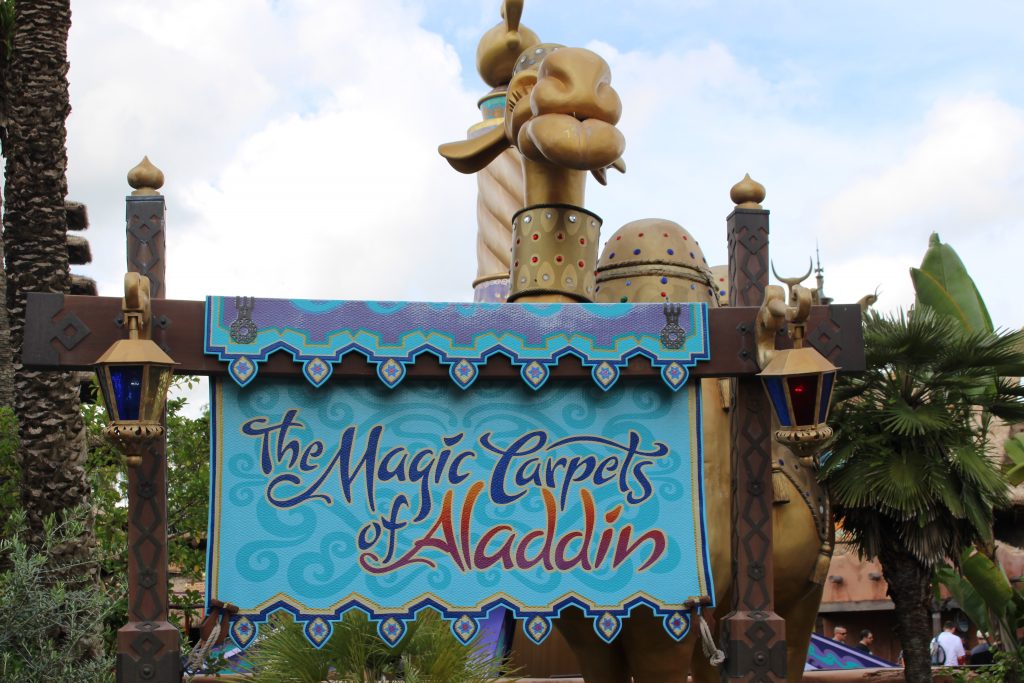 The Magic Carpets of Aladdin in Adventureland is, like Dumbo, a spinning ride that features spitting camels and the ability to move your vehicle up and down.  You also get a fun view of Cinderella Castle.

The Many Adventures of Winnie the Pooh in Fantasyland takes you through the pages of your favorite Pooh tale as little ones gaze at all of the inhabitants of the Hundred Acre Woods.  Just be prepared for the adorable gift shop at the exit, Hundred Acre Goods, and have some distraction on hand to avoid a possible “I want this” meltdown.

The Country Bear Jamboree in Frontierland is an attraction with singing bears and their wise-cracking friends.  Little ones may not get all of the jokes, but they will love clapping along with the toe-tapping tunes.

Under the Sea ~ Journey of the Little Mermaid in new Fantasyland is an entertaining voyage under the sea that features songs and scenes from The Little Mermaid.  Your little one can also help magical crabs sort their treasures in the interactive queue. 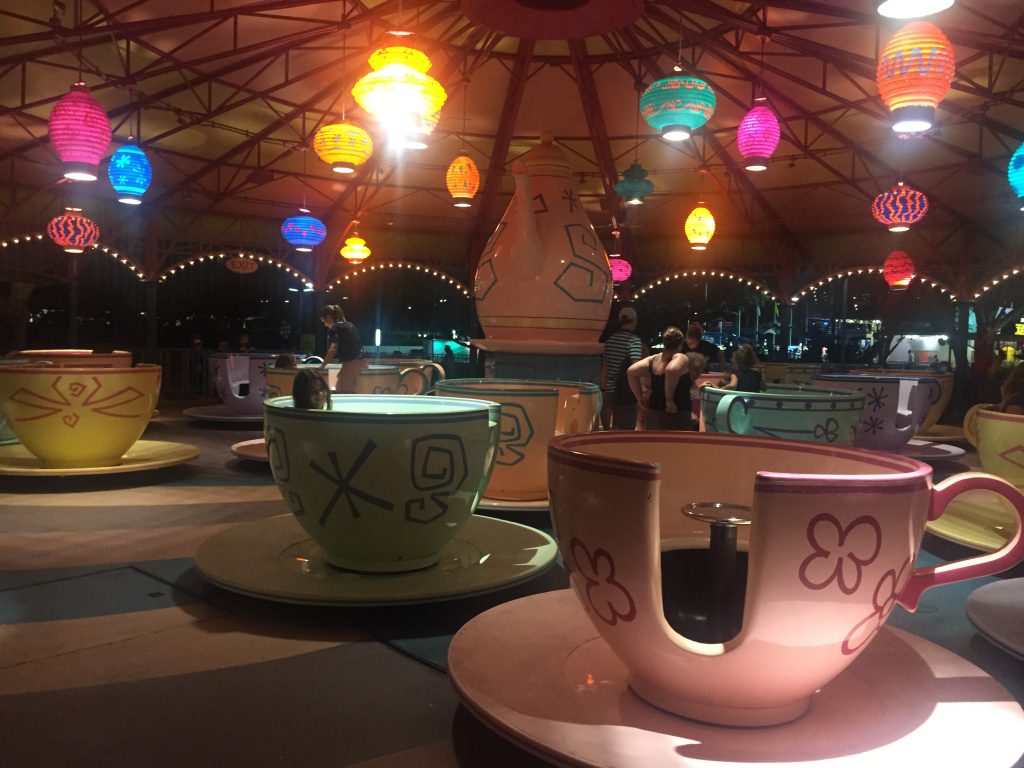 The Mad Tea Party teacups in Fantasyland are good for younger age groups, but big kids especially enjoy spinning the cups on their own.  Remember that seven year olds can ride this by themselves, so parents can accompany them through the queue and then sneak out through the exit to avoid motion sickness.

Pirates of the Caribbean in Adventureland offers swashbuckling action for older kids, including buccaneers, sword fights, and a waterfall drop that is just-scary-enough.  This ride also exits into a perfectly-themed gift shop that will appeal to this age group, so offer to try out the nearby Pirate’s Adventure ~ Treasures of the Seven Seas scavenger hunt if you want to avoid splurging on a souvenir (Bonus: You can also earn a FastPass+ voucher for Pirates of the Caribbean if you complete three Pirate’s Adventure missions).

The Tomorrowland Transit Authority PeopleMover in Tomorrowland is the most underrated ride in the Magic Kingdom.  Its often overlooked entranced and unassuming name can elicit whines of “I don’t want to ride a boring ride,” but it is exciting to whizz past Cinderella Castle and through Space Mountain.  If there is no queue, you can ask politely to stay on for a second ride.

Astro Orbiter in Tomorrowland is the big kid spinning ride.  It towers above the skyline and boasts fantastic views of the park, especially after dark.

Buzz Lightyear’s Space Ranger Spin in Tomorrowland is a live-action videogame.  Players/riders spin their vehicles and shoot targets as they battle the evil Emperor Zurg to save the galaxy.  Be prepared to ride this multiple times to beat your high score.

The Jungle Cruise in Adventureland has animatronic animals to amaze little kids, but its true fame comes from its plethora of bad (good?) jokes.  Tweens who love puns and wordplay will enjoy jokes like, “What do you call ten giraffes on the same trail?  A giraffic jam.” 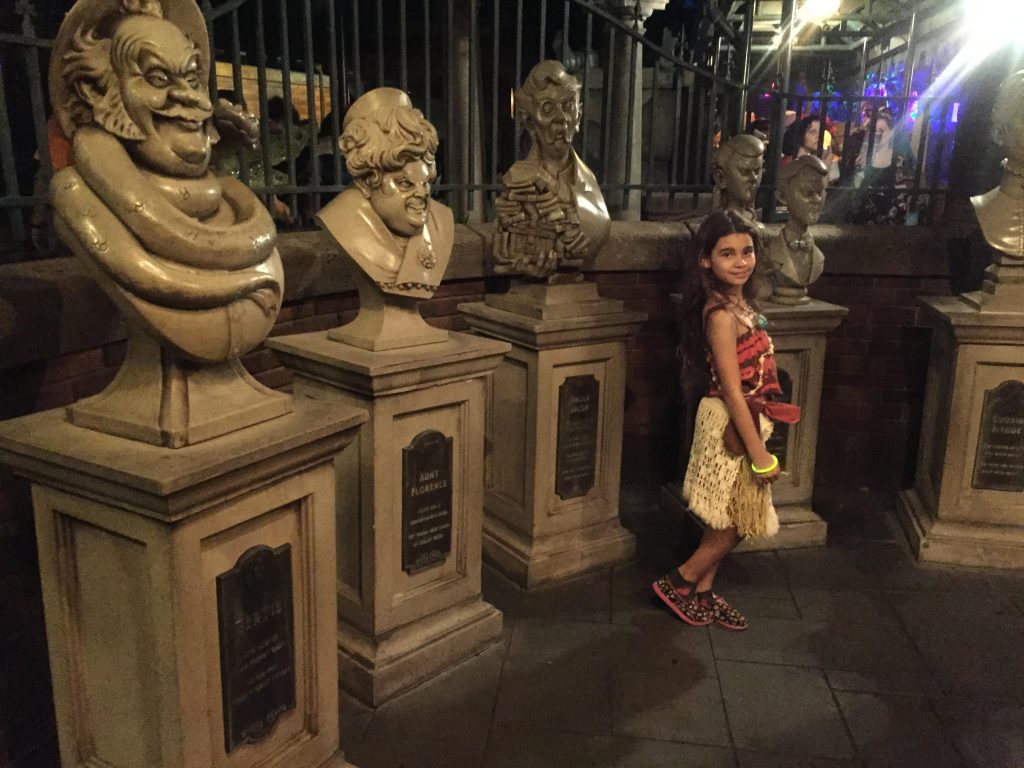 The Haunted Mansion in Liberty Square mixes fear with humor.  Younger children may balk at the ghosts and overall tone, but slightly older kids will enjoy the pun-filled tombstones and somber cast members.  Out of all of the Magic Kingdom’s attractions, the Haunted Mansion feels the most real.  If your child wants to further explore the attraction’s lore, they can find the new Tales from the Haunted Mansion book series in the nearby Momento Mori gift shop (I can never say no to a book, and these were well received by my nine year old daughter).

Best Rides for Thrill Seekers (from youngest to oldest)

When your child is old enough to experience thrill rides (the age can vary by child, so use your best judgment), take a spin on The Barnstormer in new Fantasyland.  This small coaster feels surprisingly fast, but it’s short enough to promise a quick escape for those who find themselves terrified at the top of the hill. 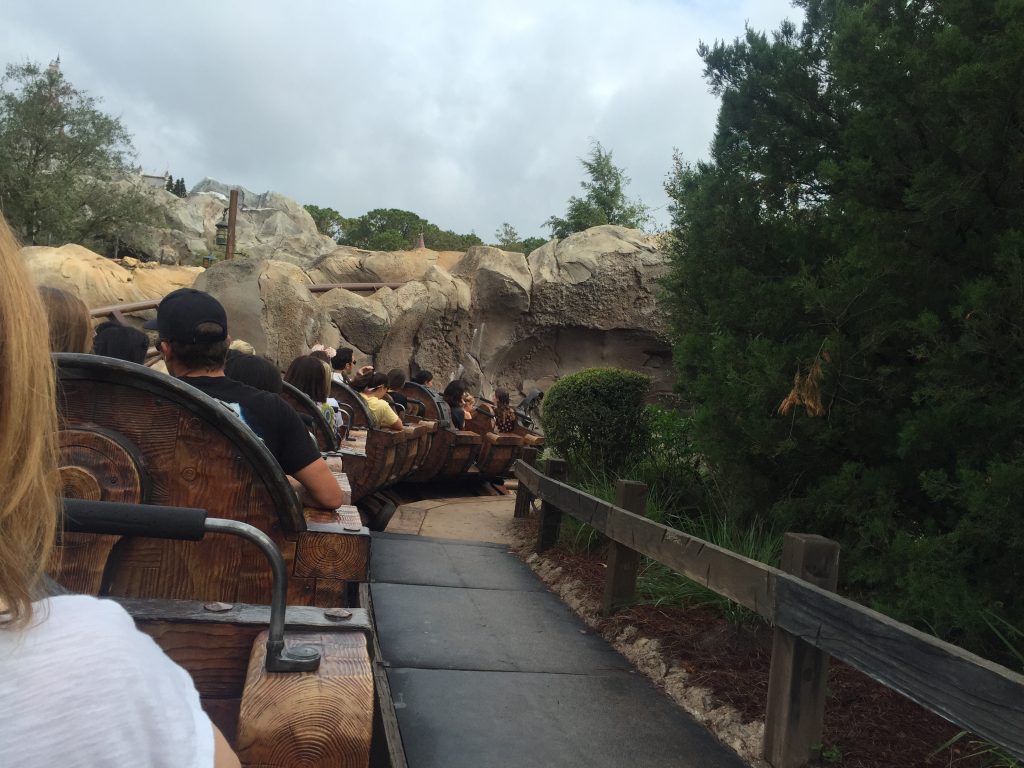 The Seven Dwarfs Mine Train in new Fantasyland is a smooth, exciting coaster that combines state of the art animatronics with swinging train cars.  The wait can often be excruciatingly long, but there are games in the queue to pass the time.  If your child is somewhat fearful of speeds, then request a seat near the front of the train because the back feels noticeably faster.

Splash Mountain in Frontierland is a water ride, and it repeatedly warns that you WILL get wet.  It has small drops and smooth turns through the tale of Brer Rabbit and his furry friends.  It is relatively smooth sailing until you fall into the Laughing Place and then climb a hill that leads to a sudden drop into the briar patch, which always gives me a jolt of adrenaline.  Fortunately it ends in a jubilee of singing animals that is sure to put a smile on anyone’s face.

Big Thunder Mountain Railroad in Frontierland takes riders to the wild west as it winds over and through valleys and mountains.  You will be jostled and shaken throughout the ride, so it is not as mild as other thrill rides, but it is a treat for older thrill seekers.

Space Mountain in Fantasyland is the Magic Kingdom’s ultimate thrill ride.  It is dark, fast, unpredictable, and has single-file seats, so riders have no one to hold in the event of terror.  This is not a ride for anyone afraid of space travel (real or imagineered), so only take the launch if you can handle the biggest thrills.

Of course, the Magic Kingdom’s rides are not just for kids.  The diverse attractions are sure to be appealing to magic-seekers of all ages!