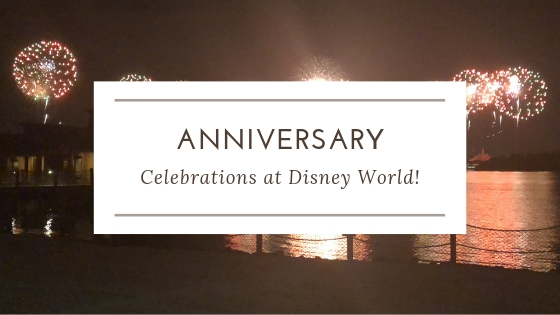 Walt Disney World is a great place to celebrate any event. Families tend to focus more on birthdays, but anniversaries are important milestones that deserve their own special memories. Why not share some Disney magic with your sweetie this year?

First of all, it’s important to note that anniversary celebrations aren’t just for adults. If you plan a vacation around your anniversary, bring the kids! If you want some alone time, remember that all Disney resorts offer in-room childcare (for a nominal fee), and you can even drop your kids off at children’s activity centers located at Deluxe Resorts, including Disney Vacation Club properties at Animal Kingdom Lodge, Beach Club Resort, and Polynesian Village Resort. If you want to truly make it a family affair, encourage grandparents or aunts/uncles to watch the kids while you step out with your special someone.

When it comes to exchanging gifts at Walt Disney World, keep in mind that you can’t bring everything into a Disney park. I was excited to gift my husband with an antique straight razor… until I realized it wouldn’t pass through security. If you head into a park, leave the bottle of champagne in your hotel, too, as well as anything that you just plain don’t want to misplace during your anniversary outing. Also remember that simply being at Walt Disney World is a gift, so cards are a great option!

When it’s time to mark the happy occasion, most couples opt for extravagant sit-down meals at premium restaurants like Victoria and Albert’s or Les Chefs de France. My husband and I had an unfortunately bad experience this year at Le Cellier, so next time we’re going to look for activities that involve less waiting for food and more having fun. If you would rather bond than wait for an open table, check out some of these ideas…

You could re-live your honeymoon in Epcot’s World Showcase, or go on the honeymoon you wish you had taken. If your destination isn’t represented in Epcot, remember that you can visit every continent together on It’s a Small World. Longtime Disney couples and/or those who spent their honeymoon at the Most Magical Place on Earth could go on a romantic scavenger hunt and revisit their first ride, first meal, first character, and so forth. The point with these activities is to rekindle memories of your many happy years together.

For adventurous couples, start a quest in the Magic Kingdom. Both Sorcerers of the Magic Kingdom and Pirate’s Adventures: Treasures of the Seven Seas offer exciting problem-solving opportunities for couples who want to get up and move. If you successfully complete your quest, celebrate with a Dole Whip or…

Go on an ice cream crawl. This is possible in any Walt Disney World park, but my favorite is Epcot. Get a scoop at L’Artisan des Glaces in France or the Gelati stand in Italy, and cool off with a frozen treat at Club Cool. If you decide to try some frosted goodies in the Magic Kingdom, don’t forget Dole Whip, Citrus Swirl, the Plaza Ice Cream Parlor on Main Street, and (for a limited time) Peter Pan key lime ice cream at Storybook Treats.

If you’re tired after a long day in the parks with your kids, try a romantic (and free) boat ride. Although Disney offers private and small group excursions for a fee, you could instead opt to take the complimentary longboat between Epcot and Hollywood Studios, the ferry to the Magic Kingdom, a canal boat from Disney Springs to DVC properties at Saratoga Springs or Old Key West, or one of the smaller boats from Magic Kingdom to Wilderness Lodge, the Polynesian, or the Grand Floridian. These aren’t the most private, but they are romantic nonetheless. They could also be a start to a great adventure away from the crowds of the parks.

Outside of the parks, check out options for feasting and festivities at the Boardwalk and Disney Springs. Both offer many lounges for libations and entertainment, and you won’t need a reservation to sit at the bar. If you’d rather get a drink at a DVC resort lounge, check out Trader Sam’s Grog Grotto in the Polynesian for a rum-centric oceanic adventure or Victoria Falls in Animal Kingdom Lodge’s Jambo House for an intimate wine before watching animals on the nearby savannah.

If you want to make your anniversary a truly family affair and include your kids, celebrate love with Ariel, Eric, Rapunzel, and Flynn Rider at Trattorio al Forno’s Bon Voyage Breakfast. The service at this table service character breakfast is always top-notch, and you can even order steak and adult beverages. Plus, your kids will enjoy telling the princesses and their beaus that their parents are in love, too.

Whatever way you celebrate your special day, remember to take some time to appreciate each other. Walt Disney World is about having fun and riding rides and meeting characters, yes, but it is truly about family. Celebrate yours.