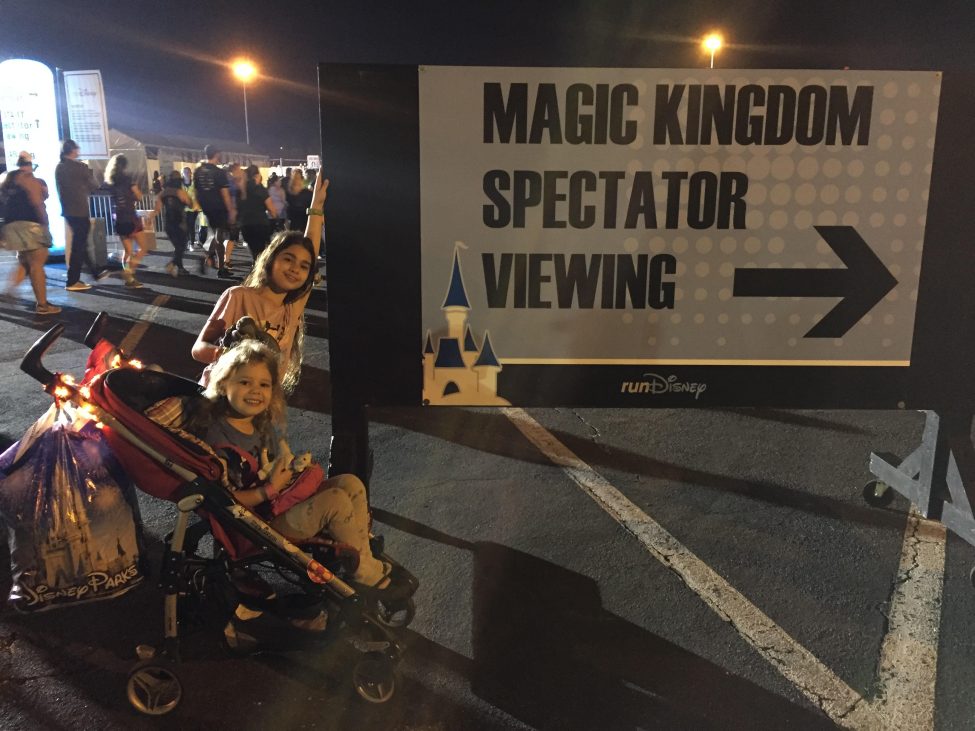 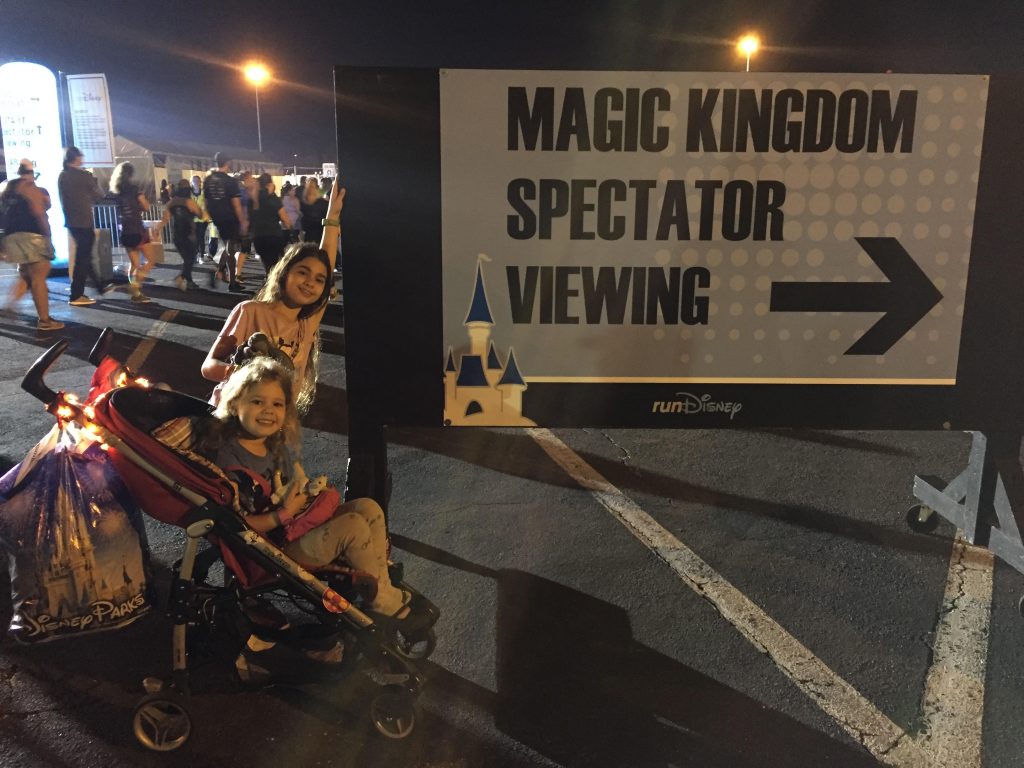 Do you love to run?  I, for one, do not.  In fact, I can accurately say that I hate to run.  When my husband decided to participate in the Fairy Tale Challenge at this year’s Princess Half Marathon, I imagined that I would get to sleep in and lounge by the pool while he woke up hours before dawn to run around Walt Disney World.  Well, my plan did not work out because there are so many things to do during Race Weekends, even for non-runners!

When we arrived at Old Key West, we were greeted by a sign advertising early-morning dining options for Race Weekend.  After looking at the race schedule, I realized that the restaurants opened after the runners were supposed to board their busses, so the meals were targeted toward spectators and runners’ families (and presumably the runners after they return).  If you’re going to get up early to support your runners, you may as well eat some breakfast!

Prior to the races, you should check out special activities in your resort’s DVC Community Hall.  In addition to paid crafts like tutus and wine glasses, you can make free cheer signs to greet your runners along the track or welcome them when they return to your resort. 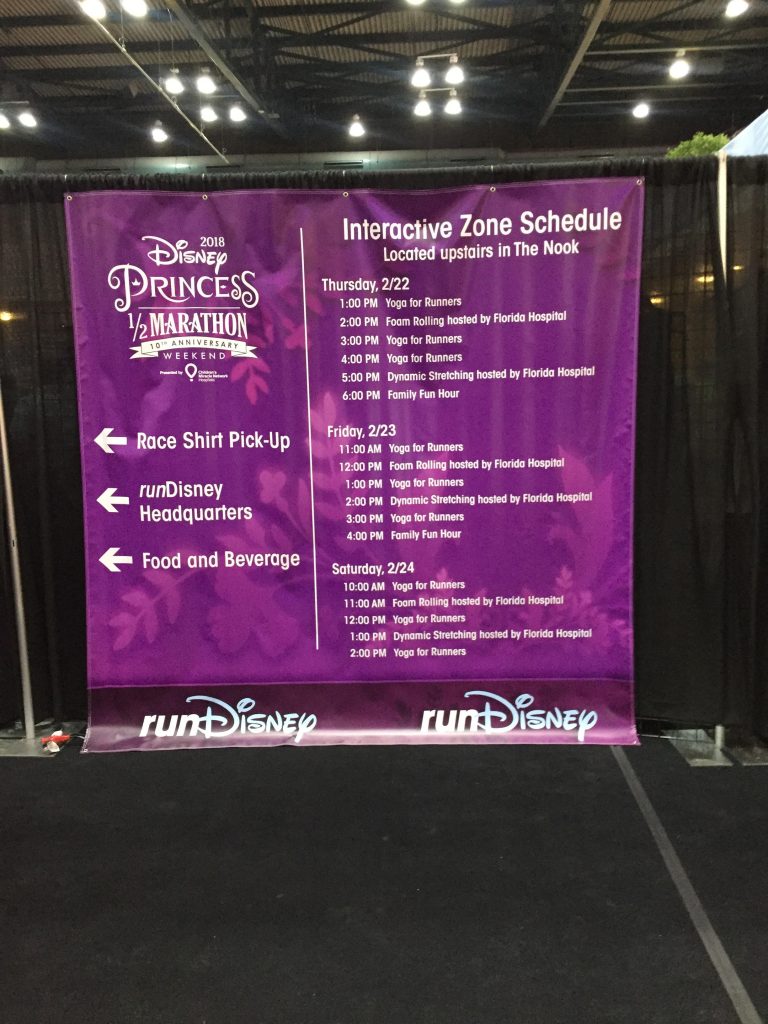 The Race Expo is another entertaining place for non-runners to explore, and it’s accessible with special Mears motor coaches from any Walt Disney World resort.  Once there, you can check out the official runDisney merchandise area as well as another shopping area that features running gear and accessories, meet characters, and participate in yoga and other activities.  The Expo is open to runners and non-runners alike, so everyone can participate and possibly pick up some freebies from sponsors. 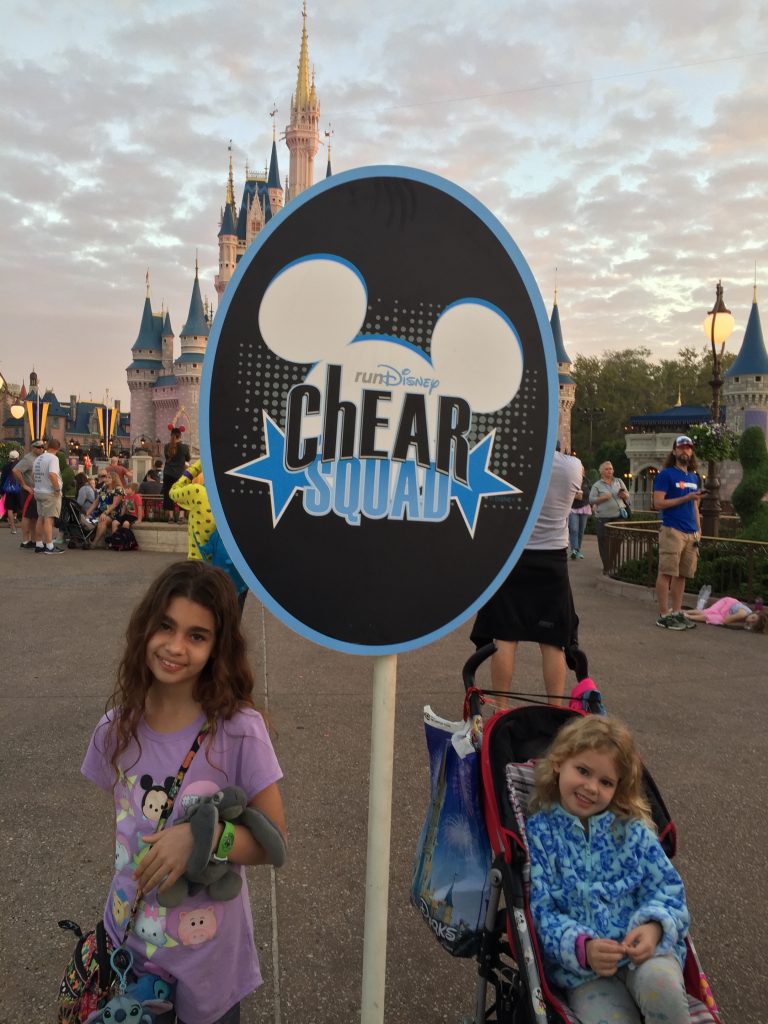 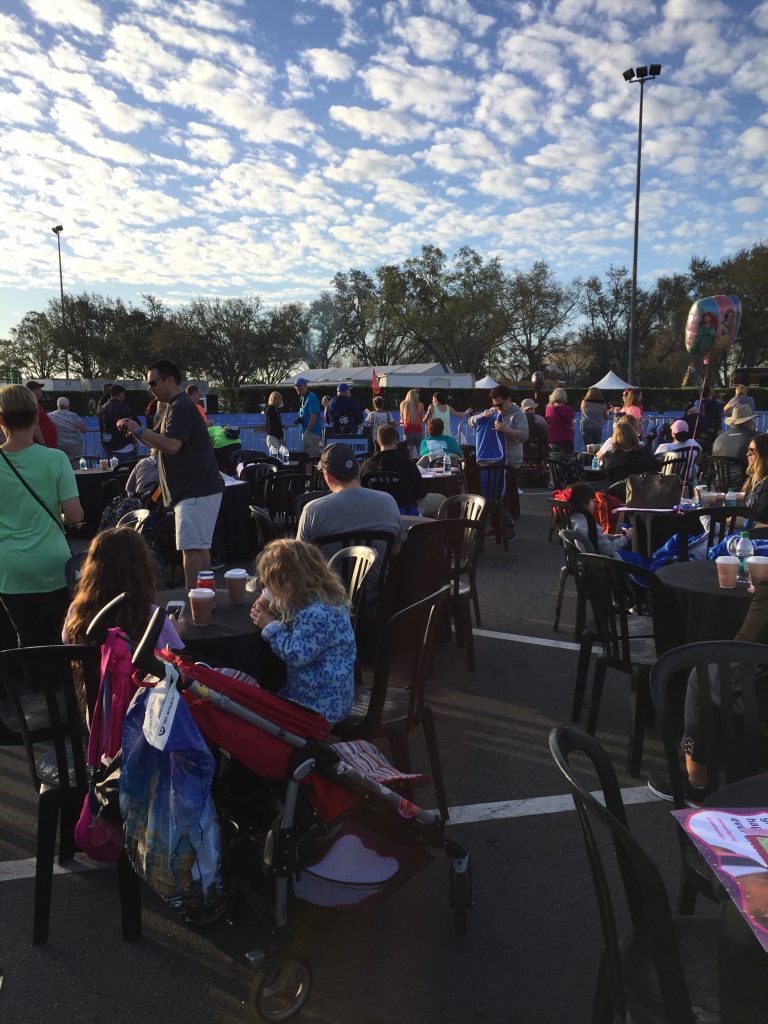 Another fun offering for non-runners is the ChEAR Squad.  This is an add-on that costs just under $70 for the “gold package,” which includes a backpack with a picnic blanket and cowbell, a special viewing area in front of Cinderella Castle, and a finish line waiting area stocked with coffee, hot cocoa, and canned soft drinks.  In order to participate, you must collect your wristband and backpack at the runDisney Expo at the Wide World of Sports prior to the Half Marathon.  On race day, you can ride the same busses as the runners and follow the signs to the ChEAR Squad locations at the finish line near Epcot and in the hub at Magic Kingdom.  Both of these locations are actually difficult for shorter spectators, so we unfortunately missed my husband crossing the finish line and passing through Cinderella Castle.  Even though my daughters and I splurged on this because it was our first race, we will most likely not do so again because there are many other free options for those watching the races. 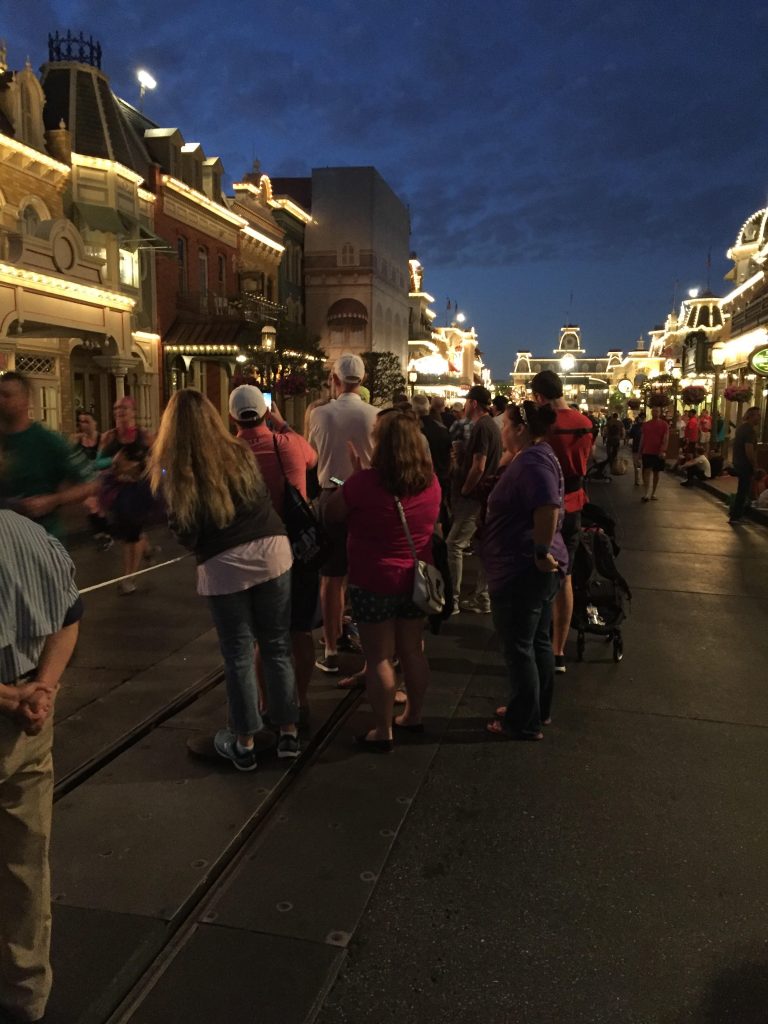 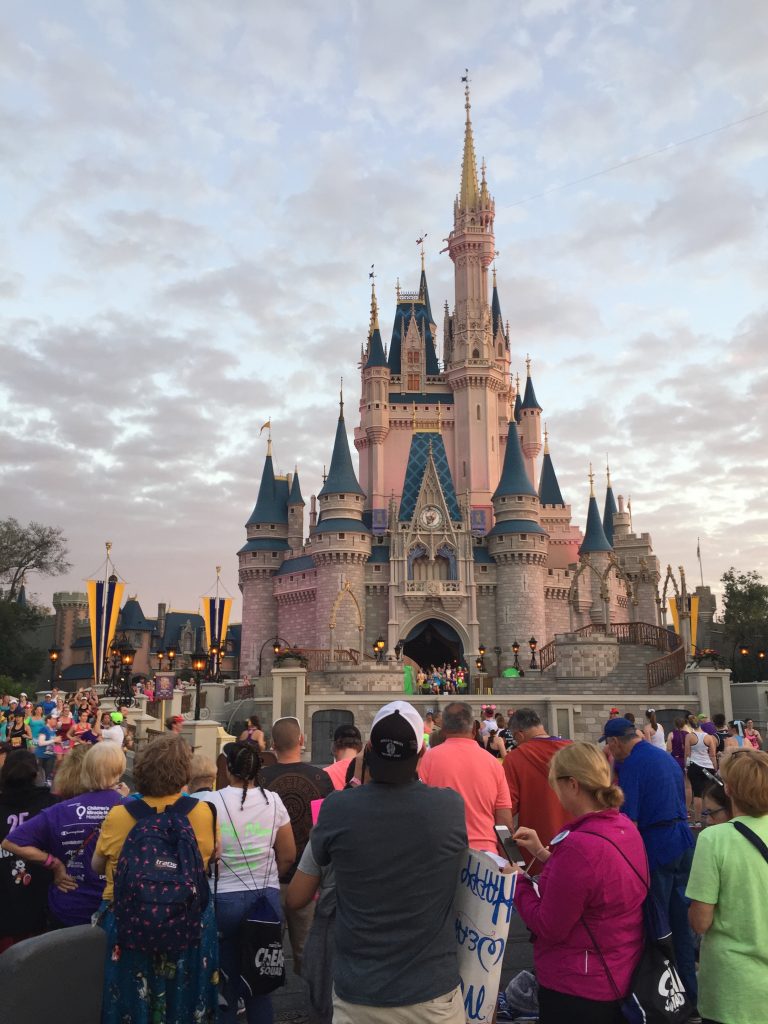 All other spectators also ride the runners’ busses and have access to everything but the two ChEAR Squad locations.  This means that you can listen to the deejay at the starting line before the races, catch a glimpse of some of the characters waiting near the finish line, sit on bleachers at the finish line, ride the monorail between Epcot and Magic Kingdom, and get early access to Main Street, U.S.A.  The Emporium and Casey’s Corner were both open in the Magic Kingdom, and there were plenty of viewing areas along Main Street when we arrived.  Again, all of these spectator options are free.  My daughters and I secured a spot in front of Casey’s, and I texted my husband to let him know where we were going to see him.  I then tracked his run with the Find Friends app on my phone, so we all waved and cheered when he ran past.  Other spectators were incredibly accommodating and let those with approaching family members get better views, so it helps to somehow track your runner and then ask if you can sneak up front for a minute or two while they pass.  If you time it well, you might even see your loved one from the monorail as you drive through Epcot (I did, but it was luck and not timing)! 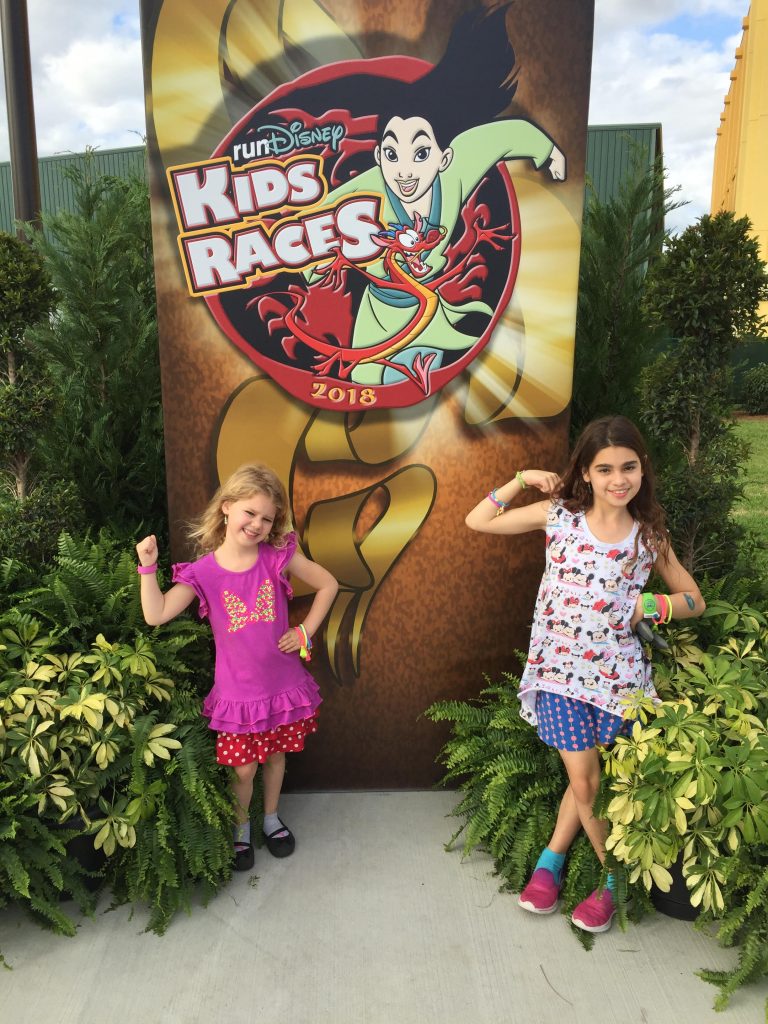 If you attend the races with little ones, you may want to sign them up for the runDisney Kids’ Races.  These are offered on the Saturday before the Half Marathon and are held at the Wide World of Sports fields.  The dashes are separated according to age and have multiple heats, so participants in a dash that begins at 11:00 can attend anytime between 11:00 and noon.  All of the kids get the same shirts and rubber medals, as well as all-they-can-eat GoGo Squeeze applesauce.  Just note that the Mickey Mile race is more strict than the younger dashes, so participants in that race start lining up approximately half an hour before the race begins and are all released at the same time.  This can be much warmer than other races (it was ninety degrees in February), so dress accordingly and bring sunscreen.  After each kids’ race, you collect your runners from a corral near the finish line by presenting a numbered pick-up tag that corresponds to the child’s race bib, so you do not need to be at the finish line when they finish and can watch from elsewhere along the track.  Remember to look up your runners’ photos online after the race because photographers along the track capture some pretty great moments! 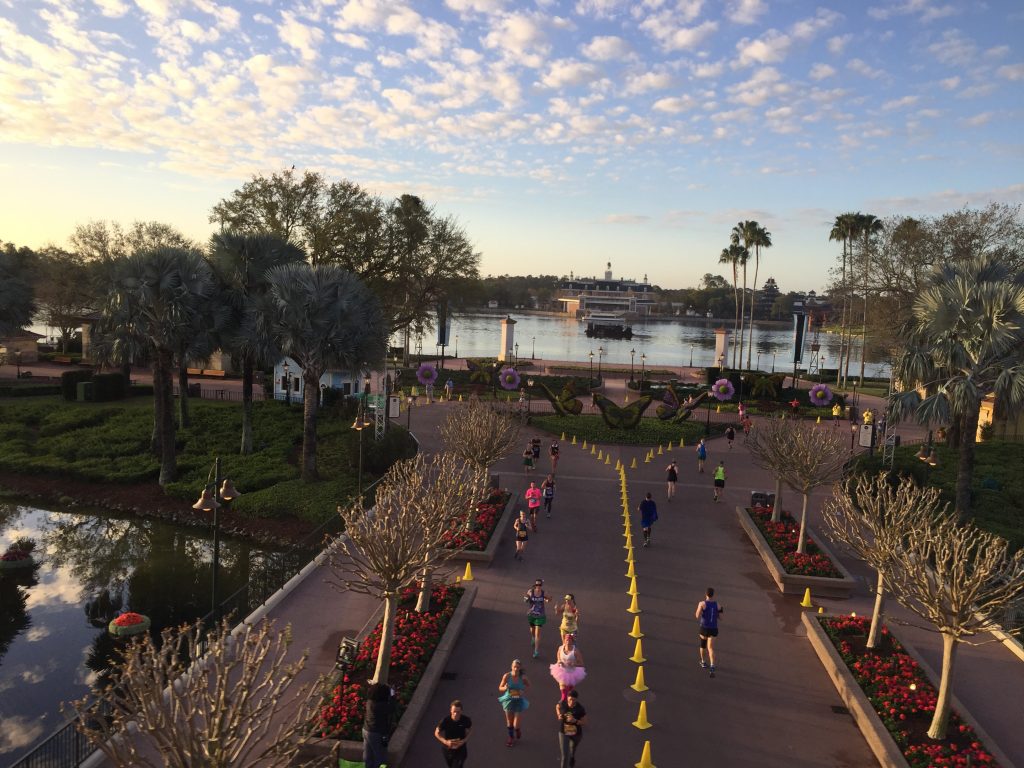 Finally, if you think you might actually like to run, or at least walk, you should consider the 5K.  This is also a great option for older kids who would rather have a “real” medal and/or would rather not spend the middle of their Saturday waiting in the blazing sun for the Mickey Mile (kids have to be accompanied by an adult in the 5K).  Many participants in this race actually walk, and you are only required to make a 15-minute mile, so it can be doable even if you like to keep at least one foot on the ground at all times.  When I was on the bus to the 5K, which I reluctantly agreed to do because I wanted a medal, another racer told me that the unofficial 5K motto is “you can do anything for three miles.”  The atmosphere was fun and encouraging, and I am incredibly happy that I chose to participate.  I even ran for most of it!

If you find yourself at Walt Disney World during a Race Weekend, remember that it is not all about running.  There are still plenty of ways to have fun and make new memories!